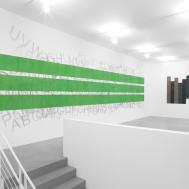 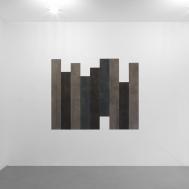 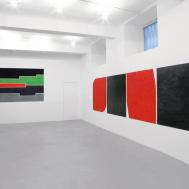 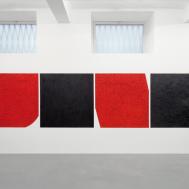 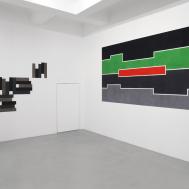 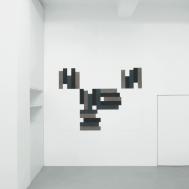 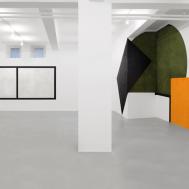 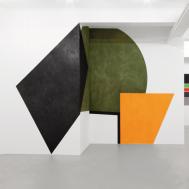 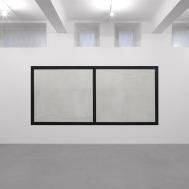 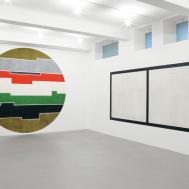 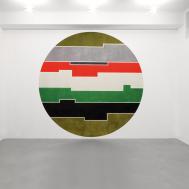 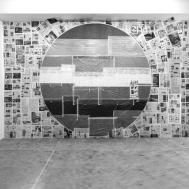 On Tuesday 15 December 2009 an exhibition of works by the British artist David Tremlett opened at A arte Studio Invernizzi. On this occasion, the artist is presenting eight wall drawings, specially created for the spaces in the gallery.
Once again, in these works emerges the underlying element that has always characterized his artistic practice - that is, an active and concrete approach resulting in an apparent modification of the spatial factors according to the surface areas and colours that constitute the work and establish its relationship with the exhibition space.
Tremlett’s coloured ‘drawings’, executed directly on the wall by spreading the pigment with his hands, create a direct and very physical relationship with their setting.

‘In the entrance room of A arte Studio Invernizzi, a large wall drawing consists of three long bands of light green that extend horizontally, and, between one stripe and another, the letters of the alphabet appear. Like the notes in a musical score, the letters dance on the wall and cross the stripes, creating a mysterious pattern that engages in a dialogue with the rigidity of the bands, making the whole wall vibrate.’

‘In the basement room, trapezial and circular forms with dark colours and an imposing presence are located in a part of the space that is not normally used ... The forms penetrate each other and, incorporating the corners, create a continuum between the areas involved, drawing the observer’s attention to a part of the gallery that would otherwise be ignored.
There are other wall drawings on two of the main walls: one is circular, the other rectangular. Applied using pastel and graphite grease, the colours are similar for both: grey, black, red and green. Both works are characterized by the presence of a broken line that divides the different areas of colour horizontally. The starting-point was, once again, the recollection of a journey, in this case to Mexico.'
This is what Antonella Soldaini has written in the introductory essay to the bilingual catalogue that has been published on the occasion of the exhibition, with photographs of the works on display, a poem by Carlo Invernizzi and up-to-date biographical and bibliographical notes.