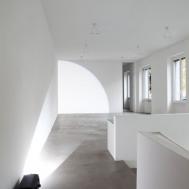 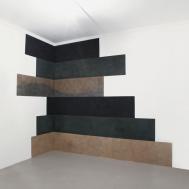 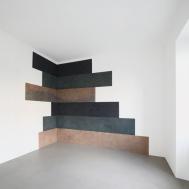 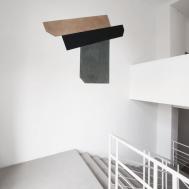 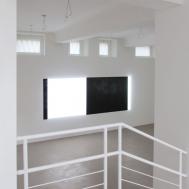 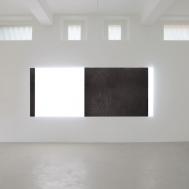 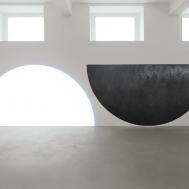 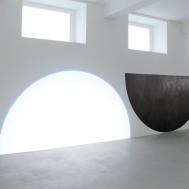 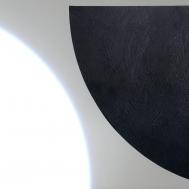 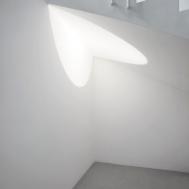 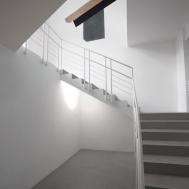 The A arte Studio Invernizzi gallery opened on Tuesday 24 September at 6.30 p.m. the exhibition The Space of a Duo with the presentation of works by David Tremlett and Michel Verjux.
Ideated in relation to the gallery space, the exhibition is presented as the result of an active collaboration between the English and the French artist.
The upper floor of the gallery exhibited works carried out individually. In the first room Michel Verjux has created a luminous projection in which a band of light, starting out from the ceiling, crosses the exhibition space, remaining tangent to the wall, illuminating a semicircular portion of one of the room's walls, opening itself to the possibility of an intense dialogue with the volumetric articulation and spatiality of the gallery's ambient. In the adjoining room David Tremlett has presented a corner-based intervention created with graphite and colour pigments by way of a progression of variously sized horizontal bands that are tangential which redefine the spatial perception of the spectator.
David Tremlett also presented the work entitled Construct at the gallery entrance which communicated with the work by Michel Verjux entitled Mini-découpe mur/plafond (source au sol) at the lower floor, where the two artists have worked together to carry out two works which establish a close dialogical tie between the poetic of Verjux's perception of light and Tremlett's research of physical and volumetric articulation.
"The former Ambi-balance, for the wall on the right, is made up of two semicircles which are arranged on the wall in such a way that each touches the floor, one by Verjux and the other by Tremlett. The starting point was the selection of a geometry: a circle was 'decomposed' into two parts and overturned on one side in such a way as to create two identical forms although having opposed direction and orientation. [...] Zipped on the other hand flanks two stable forms, a square and a rectangle, with two thin strips, two side 'zips', two moments of interruption of the blazing light and the darkness. Also in this case the two artists alternated their intervention in the composition of the work and to the same degree: the two large forms, the one projected and the other created by the application of grease, are placed in reciprocal contact and flanked, at their ends, by two thin bands that fragment the disconcerting continuity between two such different matters and masses, introducing a rhythm that 'starts up', that 'activates' the work".

On the occasion of the exhibition a bilingual catalogue has been published with the reproductions of the works on show, an introductory essay by Elena Forin, a poem by Carlo Invernizzi and up-to-date biographical and bibliographical notes.