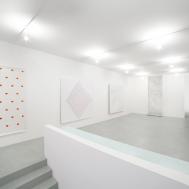 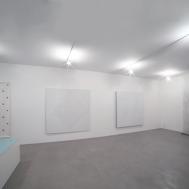 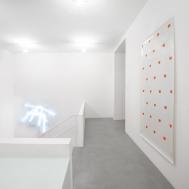 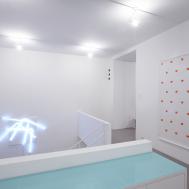 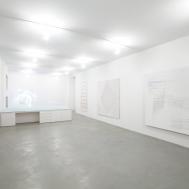 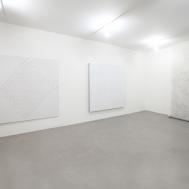 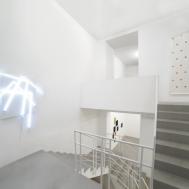 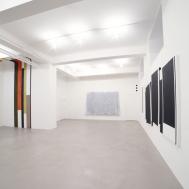 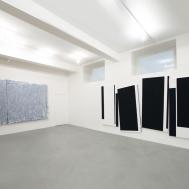 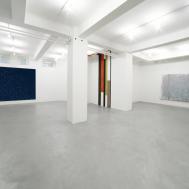 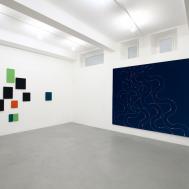 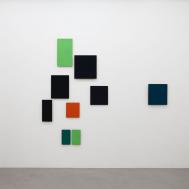 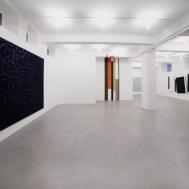 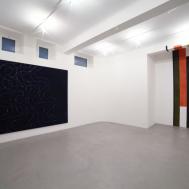 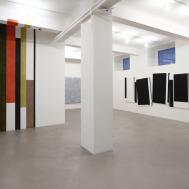 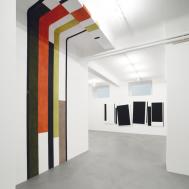 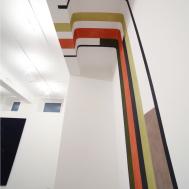 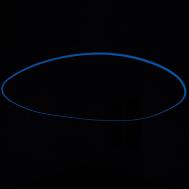 The A arte Invernizzi gallery opened the exhibition The Musical Eye, curated by the pianist and musicologist Alfonso Alberti, on Tuesday 25 February 2014 at 6.30 p.m. The intention of this exhibition is to investigate the relationship between visual art and music. This relation is vast and has manifold implications: constitutive affinities of the two disciplines, historical parallelisms and dialogue between artists. The attention here is concentrated on the presence and contemporary artistic creativity of two themes - to which correspond the sections of the exhibition - which in particular evidence the relative procedures of the two disciplines.
The first theme is time, the specific element of music without which the musical work simply does not exist and, analogously, also in the visual sphere, the dimension of doing and existing, the perennial challenge to a possible representation and explanation. Niele Toroni expresses this dimension in the most essential way, making brushstroke imprints that contemporaneously beat out the time of creating and of being. Also Dadamaino repeats a sole gesture, a brief stroke which in its infinite iteration goes to compose lines that are "facts of life", the indissoluble union of being and time, Sein und Zeit. In the works by Riccardo De Marchi the repetition of a constitutive element is explicitly configured as language that shows itself, however, lacking a code of decryption and in consequence becomes pure presence of signs in time. François Morellet, in his investigation of the structures of the real, includes that mathematical relationship without which one neither gives oscillation nor sound event. In the work by Gianni Colombo time becomes the very condition of existence, exactly as is the case for the musical work: his structures in movement investigate the doing and undoing of forms, their modification and their elusiveness.
The work by Mario Nigro, consequently, leads ideally towards the second section of the exhibition: in his Total Time the succession of the gestures and the moments is declined by way of the use of colour and its variations that at times appear to be cadenced and sometimes infinitesimal.
The second theme - investigating creation by means of colour - is harmony. In the works by Carlo Ciussi possible consonances and dissonances pursue each other in curvilinear forms which to the musicality of the harmonic result add the musicality of the line. Günter Umberg investigates the monochrome surface and its impregnable concreteness and physicalness: in his Territorium he chooses to extend this research by way of the confrontation of different surfaces, of different worlds. In the work by David Tremlett the harmonic creativity is connoted in a unique way by means of the direct relationship of the artist's hands with both the pigment and the surface, with a cadence of colours that place themselves in a specific relationship with places and situations. In the case of Rodolfo Aricò the dissonant, heterodox element is a constant poetic preoccupation, understood as breakage or rupture of the unrestored - and even less understood - harmony while being, at the same time, the only real and possible harmony. And in the work by Bruno Querci, to conclude, the harmonic research is singularly reduced to the premise of only two colours, black and white, from the consonances and dissonances of which one has the creation of spaces to be passed through with the musical eye.

On the occasion of the exhibition a bilingual catalogue has been published with the reproduction of the works on show, an introductory essay by Alfonso Alberti, a poem by Carlo Invernizzi and biographical notes of the artists.