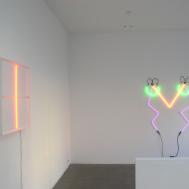 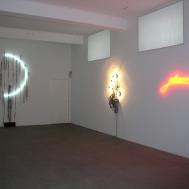 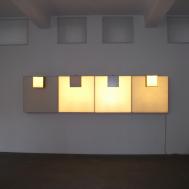 On Thursday 18 March 2004 A arte Studio Invernizzi presented the exhibition Segni di luce.
This exhibition, devoted to artificial light as a means of artistic expression, proposes a retrospective reading based on a number of works that induce us to reflect on the changes amid continuity: continuity of the stylistic choices and changes in what they entail. The sensorial adventure mentioned previously found a very appropriate medium in neon light, which was  adopted by numerous artists working in a wide variety of styles.
With the intention of allowing the spectator to participate consciously in the formative processes and of making the work itself a dynamic process in progress, artists such as Gianni Colombo and François Morellet made use of technologically advanced media. Morellet’s neon tubes became a distinctive feature, while Colombo developed an environmental research where the inter-relation of the observer became essential, many years before any ‘interactive’ research had taken place.
Dan Flavin’s neon lights are nothing other than the standard commercial units that may be purchased in shops and installed in the home and workplace, and they have the same life: his approach to the world of non-artistic production represents a ‘lay’ turning-point in the spiritualism inherent in the abstract para-monochrome currents of painting, which is based on the symbolic and emotional emphasis of the pure colour.
Keith Sonnier's luminous objects become sequentially lit environments, going off and on in simplistic waltz time thereby invoking an emotional, nostalgic and suggestive use of materials.
The sign Miracle by Sylvie Fleury recalls the neon signs by the Conceptualists, but it is intended to be a sort of parody.
Matthew McCaslin’s lamps and exposed electric wires belong to everyday life and thus are contiguous to it, both when they present themselves as curious intricate and bright low reliefs, and when they invade the environment.
Michel Verjux’s spotlights project their circles of light into the room - walls, stairs, ceilings - where they form an immaterial trace that is, however, ‘other’ with regard to the dominant one.
Tastuo Miyajima’s leds offer us an incessant proliferation of arithmetic series, sets of numbers that follow one another at different intervals. Bright and silent, the works open up to the interpretation of the observer, who can perceive in them the irrevocable passing of time, or a reflection on the cognitive potential of mathematics.
On the occasion of the exhibition, a bilngual catalogue has been published including an introductory essay by Giorgio Verzotti, the images of the works installed in the gallery, a poem by Carlo Invernizzi and biographical notes.